Listed on this article are KPI metrics and definitions and how they are measured on the Analytics Portal. If you need help with a metric or term not listed here, provide feedback on this article so we can add the information you are looking for.

What is the difference between “Voicemail” vs % Missed (w/VM)?

Example: A company got 100 inbound calls. 10 calls were not answered. 5 left a voicemail.

How are Refused Calls counted?

A call was routed to a rotating queue, specifically the first user.

● The first user didn’t pick up his phone

● The first user gets +1 to refused

● The second user gets +1 to answered

● On a queue level, refused is counted if at least one person didn’t pick up their phone regardless of the overall call result

When is a call counted as having gone to voicemail?

Voicemails are counted as such when the caller hangs up after the beep signal.

What is the difference between the average speed of answer and average wait time?

Average (avg) speed of answer is counted for answered calls only i.e. it is time of waiting until a call was answered. In other words, this is ringing time.

Average (avg) wait time is how much people wait in all cases, including abandoned or missed calls.

What would be the formula or computation on how to get the average speed of answer?

This is the average time a call spends in a queue before being answered by a queue member. From the caller's perspective, this is queue greeting and ringing time. Doesn’t matter which user answers (first or second).

This formula includes actual ringing time (+ queue greeting for queues) prior to live talk with a user or a queue member (IVR is not included).

Scenario: A call is trying to connect

● Time between calls being routed to a queue/ a user and actual phone pick up is relevant for answered calls only.

● Missed or abandoned calls are not included in the formula.

How are abandoned calls determined and how can we check those calls?

A session is a call from a caller’s perspective and it includes all user’s calls or phases. There could be several calls within one session. See the diagram below: 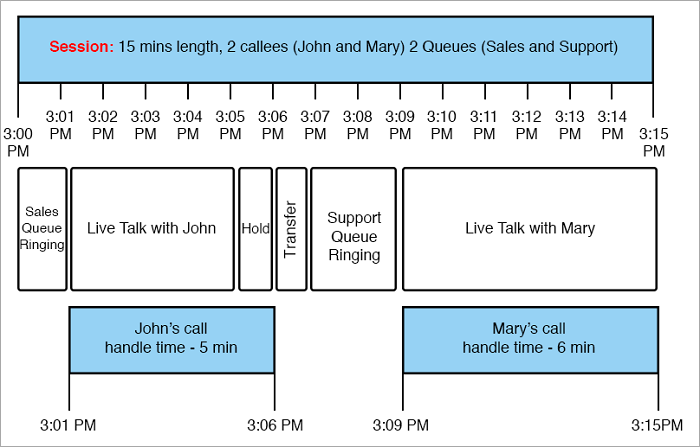 ● Abandoned calls are calls that started waiting in the queue but were hung up before the call was answered or went to voicemail. These can be seen in the calls tab by filtering for specific queues. Since we cannot point to a specific user who abandoned the call, it is named abandoned, not missed

● Missed calls can be for users only (vs queues). It’s a situation when a caller hangs up before the user answers the call. The user’s phone was ringing but was not answered. However, it is possible for the call to also be listed as answered if the user has a ring group/call forwarding and the call is answered by the user's forwarding number

● Refused calls are calls that entered a queue then routed to an extension. The initial extension didn’t pick up and the call was routed to the next ext. Was it answered or not is out of focus

This article provides instructions on how to change the ownership of a Live Reports dashboard from a user who has been deleted from the Rainbow Office account.

This article provides information on the Quality of Service (QoS) reports for the account and Rainbow Office Video Meetings.

Create a Report Subscription on the Analytics Portal

This article describes the steps to create a Report subscription.