A twenty-year old tale of the Wi-Fi (R)evolution

Wi-Fi technology must evolve to keep pace with the rampant demand for access created by the enormous increase in devices. 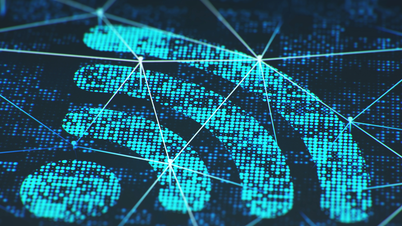 When Wi-Fi, a new wireless technology was launched in 1999 no one could have foreseen the enormous impact it would have on society. In the two decades since the first IEEE 802.11b standard was ratified, Wi-Fi has become the “de facto” method of connectivity for the majority of enterprises, and a must have for residential and consumer users.

Wi-Fi is now so popular that the Wi-Fi Alliance has renamed the standard using non-technical terminology to make it easier for everyone. And so, the sixth generation of Wi-Fi, the IEEE 802.11ax, is simply named Wi-Fi 6.

Since the early days, users, on a massive scale have embraced the mobility made possible by Wi-Fi, requiring more and more applications for their mobile devices, pushing technology to its limits with each new delivery of the Wi-Fi standard. For example, between 2000 and 2005, more than 100 million devices were sold each year. That meant Wi-Fi had to evolve to support an ever-increasing number of devices as well as to provide improved performance in any possible scenario including: indoor offices and outdoor industrial sectors, in high-density environments, supporting IoT networks and real-time applications, for enterprises, as well as open public networks.

Today, more than twenty years after its introduction, the Wi-Fi universe is still growing. In the last few years, the rate of adoption has been exponential, with a forecast of nearly 18 billion Wi-Fi devices in use by the end of 2022. This is more than twice the global population of the world! 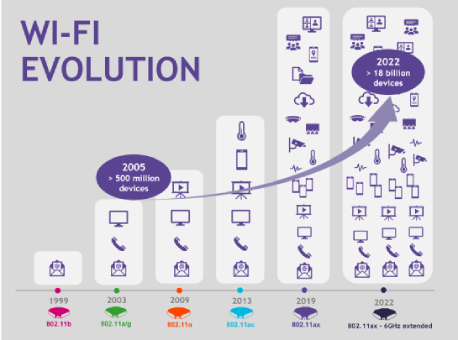 Wi-Fi 6: Not without challenges

The latest evolution of Wi-Fi to address our current day requirements is Wi-Fi 6, certified in 2019 and known as high-efficiency Wi-Fi. To add even more capacity to Wi-Fi networks, Wi-Fi 6 was quickly followed by the certification of Wi-Fi 6E in 2021.

Wi-Fi deployments are increasing worldwide across large office and residential buildings, public arenas, education campuses and mass transportation hubs. In parallel, there is a surge of emerging applications such as virtual reality and augmented reality for e-Learning, 8K ultra-HD video applications in healthcare, as well as the advent of metaverse technologies.

All of this means that Wi-Fi is once again being challenged to provide higher bandwidth with lower latency while supporting higher density environments.  Additionally, Wi-Fi is facing a spectrum shortage. The 2.4 GHz band has long been saturated by common electronics such as microwaves. In the 5 GHz band, there are portions where Wi-Fi usage is restricted, and the availability of wide channels required by bandwidth-hungry applications is limited, for example; the band has capacity to allocate only two super-wide 160 MHz and seven 80 MHz channels. In addition, the available spectrum in 5 GHz is shared with slower legacy devices. In this highly congested spectrum scenario, new Wi-Fi 6 certified devices cannot really leverage the full potential of Wi-Fi 6.

Enter Wi-Fi 6E. To describe it as succinctly as possible, Wi-Fi 6E extends the features and capabilities of Wi-Fi 6 into the 6 GHz unlicensed band.

What this means is that a new large uncongested band is available for Wi-Fi traffic. In total, Wi-Fi 6E provides a new 1200 MHz continuous spectrum in the 6 GHz band. This basically triples the combined spectrum available in 2.4 and 5 GHz bands. The addition of this new spectrum helps mitigate congestion-related problems and facilitates Wi-Fi growth with improved performance.

Another important advantage is that only Wi-Fi 6E certified devices are permitted in the 6 GHz band which means overhead and traffic from legacy devices is no longer an issue, resulting in better connectivity and less interference. Additionally, access points have more, wider channels to accommodate more devices at higher throughput. Wi-Fi 6E can use up to fourteen 80 MHz channels and seven super-wide 160 MHz channels in the 6 GHz band for high-bandwidth, low-latency applications, such as high-definition video streaming and virtual reality.

Wi-Fi 6E expands already highly efficient Wi-Fi 6 to the 6 GHz band, to achieve higher speeds, lower latency and provide more capacity to address the proliferation of Wi-Fi devices and next generation use cases.

Look for our upcoming blog where we will discuss, when is the right time to move to Wi-Fi 6E. Don’t miss it!

Ana Mata joined Alcatel-Lucent Enterprise in 2008 and has developed several roles in the company since then.

She is currently Global Business Line Manager for Network Solutions, focused on the sales enablement and evolution of different network product lines, including WLAN, SASE and SD-WAN and cloud-based network management.

Ana has previous experience in the Government and Hospitality industries, in support of ALE's vertical transformation.

She holds a degree in Mathematics BSc from the Complutense University of Madrid, followed by a postgraduate master from the Department of Statistics and Operations Research.